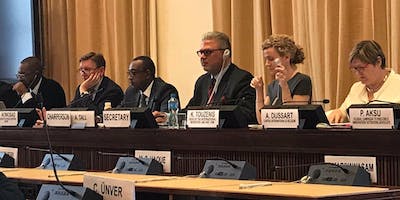 The human rights treaty bodies are independent mechanism that monitor implementation by States of their obligations under the core human rights treaties. They are one of several mechanisms that monitor human rights situations in countries around the world. The discussion will touch upon the treaty body system and other human rights mechanisms with a focus on the issue of migration, including root causes and persons in situations of vulnerability, such as women and children. Mr. Smith is currently with the Field Operations and Technical Cooperation Division, Africa Section of OHCHR, which he joined in January 2019. He served as the Secretary of the Committee on the Protection of the Rights of All Migrant Workers and Members of Their Families from 2013 to 2018, and also served as the Secretary of the Convention on the Elimination of All Forms of Discrimination against Women since August 2010 when he joined OHCHR.
Previously he was the Deputy Chief of the Treaty Section of the Office of Legal Affairs at United Nations Headquarters in New York, and also served as a Legal Officer in the Legal Affairs Section of the United Nations Integrated Mission in Timor-Leste. He has been with the United Nations since 1995. He holds a Juris Doctor from the Washington College of Law of the American University and a Masters of Law in International and Comparative Law (LLM) from Georgetown University Law Center. He received his Bachelor’s Degree from Boston College where he majored in Political Science. Mr. Smith is a national of the United States of America, is married and has two daughters.