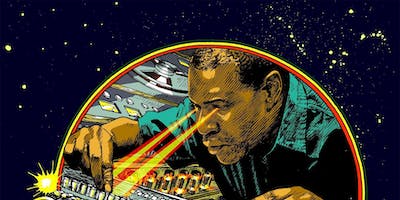 SCIENTIST (Kingston, Jamaica) "Hopeton O. Brown aka Scientist is a legendary recording engineer & producer, who, as a protégé of King Tubby, burst onto the reggae scene in the early 1970’s with a reckless mixing style that seemed to outdo even King Tubby's wildest extravaganzas.After leaving King Tubby's studio at the end of the 1970’s, Brown became the principal engineer at Channel One Studio, where he mixed several albums for artists including the Roots Radics, Linval Thompson and Jah Thomas.In 1982, he left Channel One to work at Tuff Gong studio, where he made a series of albums themed around Scientist's fictional chievements in Space Invaders, Pac-Man, Vampires and winning the World Cup. The music on these albums was played by Roots Radics, his most frequent collaborators.
An outstanding practitioner with a truly unique approach to music, Scientist was pivotal in the development of dub and continues to innovate and inspire today."