How AI is used in industry within Cancer Research 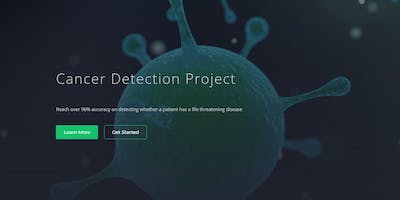 Just a few decades ago, young investigators and physicians were often told not to go into oncology (study and treatment of tumours) because the disease is so complex and the clinical outcomes were so discouraging. Today, oncology is one of the most exciting fields in biomedicine because of the many astonishing advances research continues to yield. It is interesting to reflect on what was known about cancer at the time AACR (American Association for Cancer Research) was founded. The earliest theory of cancer was based on the humoral theory of disease articulated by Hippocrates (460–370 BCE). It postulated that the disease was due to an excess of black bile. Apparently, this was not a bad hypothesis since it lasted about 1,900 years. However, during this time, the theory was never challenged by actual inquiry until the Renaissance, when anatomic dissection by Andreas Vesalius and others failed to reveal the existence of black bile.
In the 1700s, it was postulated that cancer arose from coagulated lymph. The modern era of cancer research really began in the 19th century and led to the current concept developed by several investigators, notably RudolfVirchow, that cancer is a disease of cells. But what of the current times and the upcoming future? Who are the leaders in technology within cancer research and do they communicate well with the state of the art within computer science and machine learning? SpeakersWe are proud to bring you Doctor Marius Gheorghe, Senior bioinformatician, who works atNEC Oncolmmunity AS, a research based company that use AI to empower precision cancerimmunotherapy, and thus improve the outlook for patients with late-state disease. He recevied his PhD at the University of Oslo in Computational Biology and Gene Regulation and has over 6 years of industry experience as a software engineer. We will also present Marius Brataas, data scientist at Inmeta AS, who recently won a 2019 top 5 Kaggle competition in creating a software that accurately predicts whether or not a patients cells contain cancer (over 96% accuracy)- thus effectively shedding light in cancer automation, opening up a scalable option for cancer detection for patients around the world. GoalTheoretical A high level objective of what the current challenges in the field are from experts in the field themselves An insight into software that predicts healthy or cancerous cells Practical: You will be given a walk through from Marius on how he conducts exploratory data analysis from 130,000 images of healthy and cancerous cells. Who are we?Our company Sci-Code's mission is to provide cutting edge courses to ambitious individuals wanting to thrive in their field in the 21st century. We are sponsored and partnered with CAIR (Centre for Artificial Intelligence Research), MaTRIC (Centre for Research, Innovation and Coordination of Mathematics Teaching), and theResearch Council of Norway. ------------------------------------------------------------------------------------------------------Don't forget to get your ticket soon before our free tickets are sold out.